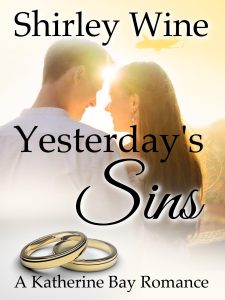 Some sins are unforgivable, and Catriona has vowed to never forgive Alex …  His mistake was grievous and left his honour badly tarnished, something he finds intolerable …

Accused of the hit and run that killed his nephew, Catriona has had time in plenty to regret the impulsive decision that saw her visit

Alex Kreagan in a bid to clear her name.

What she can’t forget the passion they shared or the daughter they had together, and when she fled Australia to create a new life and escape the man who threw her well-ordered life into chaos, these indelible memories came with her. For eight years she has lived in the tiny South Auckland village of Clevedon as Kate Audley, a very successful real estate agent.

Now that Alex has found her, Kate discovers he is just as ruthless in his determination to make amends, as he was in exacting vengeance.  Yesterday’s Sins is the captivating story of a woman’s attempt to resist the man she loves to hate and Alex’s equally determined commitment that she won’t succeed.

The doorbell shattered the early morning quiet, reverberating through the sparsely furnished rooms. Kate’s hands stilled as she combed her short, ink-black hair. The bell pealed, longer and more insistently. As she walked toward the front door, it pealed again.

“Hold your horses, I’m coming.” Shoulders squared beneath the boxy black jacket, she picked a piece of lint off her black skirt as she opened the door. “Yes?”

A profusion of flowers almost obscured the delivery man holding them. He thrust them at her. “Ms. Audley? Flower delivery.”

“For me?” “You Ms. Audley?” He tapped a finger on the cellophane. She nodded. “Then these are for you.” He dumped them in her hands and strode down the path, whistling.

Retreating indoors, she put the flowers on the kitchen table, the only place in her cottage that would hold something this size, and inhaled a shaken breath. The sweet, cloying smell of lilies and stephanotis sent goose-bumps dancing across her skin.

He escorted her into another room darkened by heavy curtains and illuminated by candles; scores of dark eyes watched as he handed her a candle. She lit it from a taper and carried it to the bier, setting it among other candles burning there.

In the white coffin lay a dark-haired child, silent and still, his skin marbled with death.

Tears gathered as she looked at that serene, innocent face.

Devastated and wracked with guilt, she knelt and laid her flowers amid other scented white blooms as she offered up a prayer for forgiveness…

Sucking in a harsh breath, Kate backed away from the flowers as she rubbed her hands up suddenly chilled arms.

Am I finally going crazy?

Nestled among the flowers she saw a white envelope. Sick with trepidation, she opened it and extracted an embossed card.

Her harsh, indrawn breath was loud in the silence.

Few people knew it was her birthday. Fewer still, knew Kate was shortened from Catriona in her new identity.

Panic clawed and ripped at her self-control. Who the hell has sent me these flowers?

She touched a perfect carnation with a shaky finger, whispering, “Happy birthday, Chris.”

Eight years ago Chris and her father died in a fiery car smash.

And nothing filled the empty place her twin left in her life. Embedded with their memory was one of the grey-eyed man who’d taken her ordinary life and thrown it into chaos.

Trembling, she stared at the slashing black script.

Where my family comes from, we believe in an eye for an eye, a life for a life … his deep voice ghosted through her memory.

A shudder ripped at Kate. Feverish questions bombarded her from all sides. She’d only seen his handwriting once and, at the time, had been too dazed to do more than register he held a pen.

Had he found her?

The phone shrilled. Another shudder shook her, and loath to pick it up, Kate let it ring several times.

What fans have to say:

First pregnancy/baby romance I have read in which the woman is strong and the man is the one who has to acquiesce.  Very enjoyable … Cee Cee