Tell Me No Lies 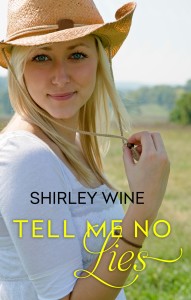 A brand new rural romance trilogy from a brand new voice: Shirley Wine introduces you to the secrets and scandals of Darkhaven

For single mum, Victoria Scanlan, a visit to the luxurious country house of Darkhaven, is a rare chance to combine work with pleasure. Securing the commission for The Wedding Of The Year will guarantee the ongoing success of her floral boutique and secure her the stability she needs for both herself and her son.

But Darkhaven comes with a shocking guest – the groom is Seth Donahue. Her young son’s father. The man who has no idea he has a child. The man she can’t forget.

After a lifetime of betrayal by every woman in his life, Keir Donovan has settled on a calm future with the glamorous heiress Davina Strathmore. She is everything Keir needs in a life partner: confident, poised, elegant, attractive, and aware that this marriage isn’t about love. But when Victoria walks back in his life, his future suddenly doesn’t seem quite so well-defined.

Keir’s passion for Victoria still burns as strongly as ever, but it’s clear she’s keeping secrets: and after a lifetime of deception, Keir has no tolerance for lies.

Shock pulsed through Victoria’s bloodstream. Suddenly light-headed, she clung to Seth’s hand as her knees turned to rubber, threatening to give way and dump her at his feet.

His dark eyes narrowed, the generous lips compressed to a grim line and he strengthened his grip, catching her other hand fluttering helplessly like a wounded bird. The concern that darkened his eyes reached right inside her, steadying her.

She heard his father’s question as if it was muffled by water. One hunted glance in Caine’s direction was enough for her to grasp his bewilderment. She took a quick, shallow breath, and then another, but this did nothing to stop the hollow sound of blood drumming in her ears.

That closet door jerked wide open as she struggled for a rational explanation, but coherent thought was impossible.

Keir Donovan is my Seth, my son’s father?

A chasm opened at her feet, and Victoria looked into the black abyss and knew she teetered on the edge of disaster. One false step …

‘Do you two know each other?’ Logan looked from her to his stepbrothe r, his brows drawn together in an ominous frown.

The grip on her hands tightened and she grasped Keir’s  unspoken warning. The instinctive response to him after all these years left Victoria even more shattered. Oh God! I’m on such treacherous ground.

‘We met several years ago. I’m flattered Victoria even remembers me.’

His wry humour grated on emotions disillusionment rubbed raw, and realising she was still clinging to Keir’s hands Victoria jerked them free. As the numbing shock receded, her mind spun in frantic circles as she groped for a plausible excuse to escape.

What Readers are saying

Long before Escape Publishing picked up Shirley Wine I was a fan of her writing. I enjoyed her Dark Romances. Now that she is writing for Escape I enjoy more the polished versions of these books. I can tell you that all the characters are well written, the challenges each couple faces to find each other again and live happily ever after realistic. I want to add that I really want Luke’s story and I want to read the Next Generation and how the deal with the secrets, lies, betrayals and Sins of their Fathers – Up Against A Wall