Safe In A Stranger’s Arms. 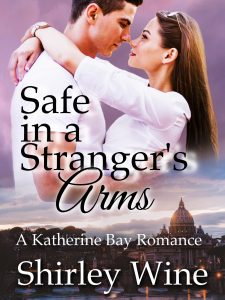 When a woman’s fight to save her family’s heritage turns dangerous, should she trust the property developer who steps in to help?

“Promise me, Jenna; promise you won’t sell the land.” Haunted by her mother’s dying words, Jenna Mullein’s attempts to discover the truth sets her on a collision course with danger. Too many people in Katherine Bay have vested interests in muddying the waters and soon her persistent questions leave her fearing for her life. When one woman ends up dead and Jenna is assaulted, Gabe Callahan steps in to help.

Property developer, Gabe Callahan is scoping out the land for an upmarket resort and intends to be in and out of Katherine Bay before locals are alerted, an intention that is thwarted when he’s drawn into the troubles of a single mother–and finds it impossible to walk away. In the face of danger, festering secrets, and small-town prejudice, fate dangles the cherished dream of home and family in front of Gabe, but he worries–will Jenna still love and respect him when she learns the dark secrets he’s hiding.

Who was he? The sense of familiarity intensified.

She knew she’d never met him, but also knew she should know who he was. As she picked up the tweezers, she heard his footsteps in the hall.

Her heart picked up a pace, an involuntary reaction that irritated her.

He walked through the door, stooping slightly so his head missed the lintel, halting mid-step when he saw her tending Zach’s injury.

“I told you I didn’t need that.” She glanced at the tin in his hand.

Ignoring her protest, he laid it on the table and flicked it open. The glossy green contrasted sharply with the scarred wood.

“Two pairs of hands are better than one,” he said, good-naturedly.

Jenna ground her teeth in frustration. Boy, does this guy love himself—or what?

He produced a penlight and shone it on the cut. The splinter glittered in the pinpoint beam.

This did as little to soothe Jenna’s temper as his satisfied smile.

Who the heck was he? His air of casual elegance exuded wealth and privilege. Those charcoal slacks and cream shirt never came off any ready-to-wear peg.

At five-three, her head barely reached his shoulder. She took a shaky breath and the heady spice of pine, sea, and warm, healthy male stirred an instinctive feminine appreciation.

The reaction was as annoying as it was unexpected.

Never again would she allow a good looking guy, no matter how hot, to derail her plans. Once, she’d allowed a life-long friendship and loneliness to blind her to the obvious—and now she was a single mother of twins.

“Doesn’t that make it easier to see?” The deep rumble of the stranger’s voice added to her unsettled irritation.

“Some.” On that grudging admission, she caught the splinter with the tweezers and deftly removed it.

“Mama kiss it better.” She lifted his foot and kissed it. “Hush, sweetheart. Finish your raisins.”

“Is that all of it? Does it need stitches?”

Jenna stopped swabbing the cut and looked at him. Was he for real? “It’s a splinter for cripes sake, not a cut artery.”

“Any injury to a child is serious.”

She selected a plaster from the packet in the first aid box and covered the tiny cut on Zach’s foot, lifted him down from the table, and watched as he ran to join his sister not even favouring the foot. “I take it you have a dozen kids?”

A dull flush crept up under the stranger’s tan. “Since when has concern for a child’s safety been a crime?”

The inference angered her. “Who the heck do you think are you?”

Her unwelcome visitor put his hands in his trouser pockets and pulled out a cell phone and two shotgun cartridges.

Apprehension had Jenna’s gaze winging upwards. His lips thinned to a grim line, his grey eyes as hard as polished steel.

“Gabriel Callahan, ma’am. And by rights, I should call the cops, have you arrested and hauled off to jail.”

uconnhusky13  A very good book. Great characters, some you can relate to, others to dream about and none of them are perfect…nice mix of romance and suspense…

Holley  Shirley Wine is a new favourite of mine. Love her strong characters and the romantic New Zealand setting. This romance left me hungering for more.