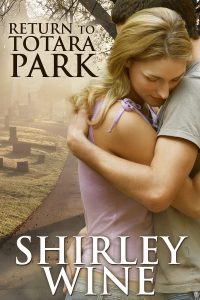 Winsome Grainger left Totara Park with a terrible secret in her heart and a darker secret in her past, and she vowed she would never return.

This vow was shattered when she and her estranged husband, Jared each inherit a half share in Totara Park, the Grainger Dynasty’s Estate. When Jared’s father’s dies, Winsome is forced to return with their four year old daughter Lacey.

Winsome has time to regret never telling him her dark secrets and why she walked out on their marriage…Now these secrets threaten her shaky marriage, her precious child’s life, her own life…Filled with foreboding, she discovers she’s a mere pawn in a dark and deadly game. A game whose rules she doesn’t know…

One glance at her estranged husband made that almost impossible. Although no longer the shy, insecure girl who’d come to Totara Park as Jared’s bride, she feared the impending meeting. It hung over her head like the sword of Damocles.

Up ahead was Gaelen’s house nestled in its grove of oaks.

The last leaves of autumn clung to the trees. Fallen leaves lay in mouldering heaps against the railings and beneath the sod, bulbs waited for spring.

As did the malevolent secrets of Totara Park.

Suffocating tension tortured every cell of her body as Jared parked in the driveway behind Gaelen’s car and switched off the engine. Between them, unspoken, lay the past with all its grief and anger.

Jared’s parting ultimatum a tangible barrier. If you leave, I will never come after you.

“Dad stipulated his will was to be read today after his funeral.” Jared was first to break the silence. He made a low, disgusted sound in the back of his throat. “I thought the family reading of a will was a discontinued, archaic relic.”

Her heart slammed against her ribs. Harvey’s will? Was that why she’d been requested to attend his funeral today and bring Lacey? And afterwards visit Totara Park?

“God knows what he’s done.” He slammed a hand against the steering wheel in frustration, amber eyes glittering.

She glanced at him, horrified. Five years ago she’d left Totara Park vowing to never again set foot on Grainger land. Now, at Harvey’s insistence, she was returning.

Gaelen and Paige would hate it.

Gaelen can only hurt you if you allow it. Dr Cartwright’s gruff words seeped into her troubled mind, bringing immense comfort. She took a deep breath and then another, willing herself to relax.

As Jared faced her, the sunlight turned his tawny hair gold, every unruly strand slicked down and in its place. “Later, when afternoon tea is over, Max Harpur will read Dad’s will. I’m as apprehensive as you obviously are.”

Jared? Jared admitting to human frailties? Winsome shook her head. She was obviously not the only one who had changed. “I didn’t think you possessed fallible, human emotions.”

He gave her a scorching look. It was a wonder she didn’t melt into the seat. “This meeting isn’t my idea. Raking over the past is pointless, it can’t be changed. Let’s keep this as civilized as we can.”

What could she say? The burden of guilt grew heavier.

“This is just as difficult for my mother as it is for you.” His clipped tone was unfriendly, his amber eyes dark with grief. “Try not to cause friction.”

“I have never caused friction.” Chin high with proud defiance, Winsome opened the door and escaped the claustrophobic confines of the car. She opened the rear door and unbuckled Lacey, lifting her from her booster seat.

“I don’t like this place, Mummy,” she whispered, her arms snaking around her mother’s neck.

That makes two of us, kiddo.

What Fans Are Saying About Return to Totara Park

What a set-up – and what a family…Shirley Wine hides the darkest secret until well toward the end…atmospheric and emotional. The farming details added authenticity…quality writing. – Chris Carew

I enjoyed this book tremendously…. The characters were well developed you could feel the love between Winsome and Jared…. the mother-in -law was vile. -gfuss –

Shirley Wine’s writing is fluid, easy, the type of stories you curl up in a good armchair and enjoy. Her stories are emotional journey’s which takes you vicariously into someone’s else’s life. -maggie –
Brilliant writing…gripped all the way through. Character development was excellent and I enjoyed the story. Emotion beautifully portrayed.  – Pamela Gervai –