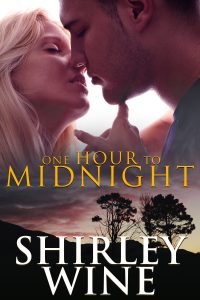 One Hour To Midnight

Ten years ago Veronica Langdon thought relinquishing her infant son was the toughest choice she would ever have to make….. turns out she was wrong.

Her child is dying and to save his life she has to re-visit her painful past, the child she gave away…. and Leon Karvasis, the man she’s never stopped loving.

Alone Veronica, tugged at her short skirt to no avail, it still revealed too much leg.  At the end of the bar she caught sight of another couple doing a tonsil dance, lost in lust and booze. Veronica looked away, uncomfortable and feeling far too much like some sneaky voyeur. If she had the guts, she’d be like Cathy and hook up with a hunky footballer and enjoy a night of hard, mind-blowing sex.

The surge of heat and sensation in her belly caught Veronica by surprise. Suddenly, she ached to feel a man’s hands on her body. It had been so very long. Could monkey sex dull her thoughts? Make her forget this unforgettable day?

She studied the green bottle in her hand, drawing patterns in the condensation on the outside of the glass with a fingernail, swallowing a touch of melancholy, but the insidious pull of memory was too strong. Once, she’d been told, today would become just another day. Ten years on it hadn’t happened.

She huffed out an impatient breath and took another swig of beer. Someone solid and heavy knocked into her from behind. Beer sloshed over her breasts and down her top and with a muttered curse, she dabbed at her chest with a tissue.

A strong hand latched around her arm to steady her.

She glanced up at the owner of that hand and the breath left her lungs in a resounding whoosh. Bereft of words, she gazed into once familiar grey eyes. Eyes she’d never expected to see again in this lifetime. In this dimly lit bar, they gleamed silver.

“You’re a hard woman to track down.” Leon Karvasis leaned close to her ear so he didn’t have to shout.

The heat of his breath stroked across skin still damp from spilled beer. His deep voice caressed every sensory nerve.

Shocked into awareness, blood careened through her body.

A black, collarless shirt, open at the neck, did little to disguise the muscles she knew it covered. He stood closer to her now than any man had in more than a decade. Heat radiated from him, warming the sudden chill that enveloped her.

The hairs on her arm stood to attention.

She slid off the bar stool, the movement bringing her closer to his chest. A ragged breath filled her senses with a heady mix of woodsy cologne, smoke and warm male musk, the pheromones radiating from him made her knees weak. She swallowed and tried to find her voice.

He’d always been big, but this close he was huge.

“What are you doing here?” The words scraped past vocal cords almost paralysed with shock.

Someone jostled her and she lost her balance. He tried to steady her, but she fell against him anyway.

It was impossible not to notice that this hard body so close to hers belonged to a male in his prime, or that he too, was equally aware of her. For one brief, fantastic moment, she imagined that the past had never happened. The fantasy faded as quickly as it surfaced. A fantasy in which the man standing oh-so-close to her was a stranger and she a woman he’d just met in a bar.

Veronica stepped back into grim reality.

The reality was that this man—and his wife—had ripped the heart from her body, without anaesthetic and she’d been left to somehow get on with her life, without that vital organ.

“I need to talk to you, Ricki,” he said, grey eyes hooded and wary. “It’s impossible here. Can we go somewhere quieter?”

Fury surfaced, ripping away the veil of shock his presence triggered.

“My name’s Veronica,” she said through clenched teeth. “As for going anywhere with you, do I look fucking stupid?”

Once I was a fool and trusted this man. Never again.

She tugged her arm free and shoved her way towards the exit, uncaring who she elbowed out of her way. A glance over her shoulder revealed Leon cutting a path through the crowd. Panicked, she darted down the dimly lit corridor where she’d seen Cathy vanish earlier and sought sanctuary in the women’s toilet. Surely Leon would not follow her here?

Finding a vacant stall, she entered, and rammed the lock home behind her. She slumped onto the seat, face buried in her hands as pain surged through her in torrents. She’d never known she could hurt this much.

What the hell was Leon Karvasis doing here in New Zealand? Why did he seek her out? Was he the colleague Milas Yeager had told Tania he was collecting?

Dear God what was she to do?

What Fans Are Saying About One Hour to Midnight:

“One Hour to Midnight is packed full of emotional triggers and realties. Well done, Shirley Wine. You’ve given us another great read! My favourite so far.” –Gaylene Atkins

“…a cracking storyline and a page turner. For me, a refreshing change to read something set in New Zealand/Australia.” –Lynn Pool

“…thank you for sharing your stories … I just finished One Hour to Midnight, and I loved it….a heartwarming story that gives hope to those of us who need it.”    —Amy