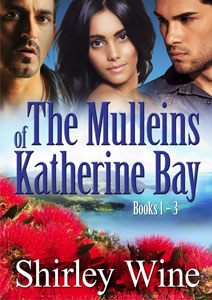 The Mulleins of Katherine Bay

Safe In A Stranger’s Arms

Katherine Bay has not been kind to the Mulleins …. and when Jenna attempts to unravel the truth behind her mother’s dying words—Promise me, Jenna, promise you won’t sell him the land—she quickly discovers there are far too many people in Katherine Bay with a vested interest in muddying the truth. When her persistent questions see her thrown in deadly danger and Gabe Callahan steps in to help Jenna is not sure if it’s safe to trust Gabe with her secrets … secrets that could see her lose her adored twins…

When Ashlyn falls foul of a ruthless gang of artifact thieves she is forced to flee … in a nanosecond Jace Mullein has to decide … an innocent woman’s life or the operation he is engaged upon…. to save Ashlyn Jace is forced to face the people he left behind and family he betrayed and he learned the good people of Katherine Bay have long memories … Ashlyn learned to trust Jace and then in one horrifying moment she discovers the truth about his past … and now she needs to question everything … does she mean anything to him at all, or is Jace using her only to exact revenge for past slights?

A Place To Call Home