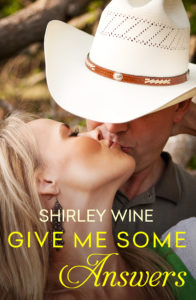 Give Me Some Answers

The final book in the stunning Darkhaven trilogy about secrets, lies, and love conquering all.

When his father’s gambling debts forced the sale of Whitby Downs station, Matt Daintry vowed he would do whatever it took to reclaim his family’s heritage. But his heart and his head were at war when he met, seduced, and eloped with Charlotte Buchanan, the beautiful daughter of the new owner.

The last person Charlotte Buchanan expected to turn up for the reading of her father’s will was Matt Daintry, her estranged husband and father of her four-year-old son, Noah. Even more unexpected, is the shock discovery that Lachlan Buchanan has bequeathed the once prosperous station of Whitby Downs in trust to Noah and appointed Matt as the child’s sole trustee, thwarting Matt’s stated ambition of regaining ownership of Whitby Downs and throwing Charlotte back in the path of the one man who can steal her equilibrium.

Very soon, Charlotte and Matt find themselves locked in a battle of wills over the land each rightfully regards as their own. Forced to work together for the benefit of their son, they need to confront the issues of their past to have any chance at a new future.

What readers are saying

I have always enjoyed Shirley Wine’s books and her latest book Give me Some Answers was as great as all the others. I couldn’t put it down _ Jean Smith
Long before Escape Publishing picked up Shirley Wine I was a fan of her writing. I enjoyed her Dark Romances. Now that she is writing for Escape I enjoy more the polished versions of these books. I can tell you that all the characters are well written, the challenges each couple faces to find each other again and live happily ever after realistic. I want to add that I really want Luke’s story and I want to read the Next Generation and how the deal with the secrets, lies, betrayals and Sins of their Fathers – Up against a Wall