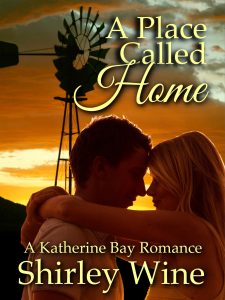 Pregnant, betrayed and on the run, Sarah turns to Heath Mullein, but this man is not the boy she loved so desperately all those years ago …

Sarah always knew her wealthy father had ended her romance with Heath, but she had never known how deep Heath’s resentment ran until she arrived on his doorstep in the middle of a storm, desperate to escape the man threatening to destroy her family and take her unborn child.

Will Heath take her in and protect her and her unborn baby from a man who has nothing left to lose? This Heath is a stranger, is he a man she can trust?

To Heath, Sarah has always been unattainable, the over-indulged daughter of a wealthy man. Now, she’s suddenly reappeared in his life, pregnant and afraid. When she asks him to marry her, Heath is angry and bitter.

Heath had always heard the old adage … take care what you wish for, you just might get it … when Sarah arrives on his doorstep it’s like a wish come true … until the man stalking her brings danger far too close to his home and those he holds dear …

Heath Mullein swore as ice hit bare skin. Hail clumped and tipped off the brim of his sou’wester and slid down the back of his neck. Freezing gale-force winds and torrential rain tore at his clothes.

It was a fitting end to a rotten day.

Then an hour ago, a deafening clap of thunder had startled his stallion.

The animal tried to find its footing as it slip-slid down a clay bank and, too late, Heath saw the gaping hole, heard the sickening crunch of breaking bones and the stallion’s agonised scream. Somehow, he managed to free his feet from the stirrups and jump clear before he was dragged under the downed horse, but it had been a close-run thing and for a frightening few seconds, he’d feared the worst.

His heart was still beating faster than a kettle drum from the close call as he’d stroked the crazed stallion’s head to calm the big animal so he could examine its leg. Heath knew he had to do what any other vet would; humanely end the horse’s suffering.

The trust in his old friend’s eyes as he raised his rifle made his heart clutch.

You have a heart? Give me a break…

He trudged home in the cold, sleeting rain, the image of standing naked under a steaming hot shower was a pleasant one. Hunger gnawed at his backbone and he just might be tempted to kill for a blistering, hot coffee.

Things always happen in threes … Heath winced as his mother’s voice ghosted through his memory.

He was not superstitious.

He did not believe that guff. An uneasy shiver slid across his skin, too real for him to be anywhere near comfortable.

Storm clouds as black as his mood reached from the tops of New Zealand’s Coromandel Range to the sea. Lightning split the heavy sky, its lurid, sulfurous light reflected eerily off the waters of Katherine Bay.

One weary foot in front of the other, Heath trudged around the neat cypress hedge that protected the homestead. The brutal westerly eased, the homestead was little more than a looming outline in this murky light.

As he reached the verandah low bellied clouds released another burst of hail.

Dark and unwelcoming, the house offered shelter from the foul weather but did little to improve his mood. On nights like this, he regretted not replacing his housekeeper. He’d fired the woman when her vicious gossip had endangered his brother’s life, and he vowed then to never again employ live-in help.

Shaking off the bleak thought, Heath stepped into the mudroom, stripped off his oilskin and sou’wester before tugging at his water-filled boots, and with a squelching, sucking sound first one, then the other foot came free. He emptied the water from them over the tub and stood them upside down in the hot water cupboard to dry. With the ease of long practice, he stepped into the adjacent laundry, stripped off his sodden clothes, and put them in the washer. He added laundry detergent and set the machine going, the cold, damp air raised goose-bumps on his goose-bumps.

Heath stepped into the cavernous hallway of the century-old farmhouse and hit the light switches.

His heart jerked against his ribs, breath backed up in his throat and his hand shot out and covered his genitals in an instinctive, protective gesture.

‘H-h-Heath?’ She backed up, eyes wide in a blanched face; hands fluttering like the wings of a wounded bird.

‘S-sarah? What in the blue blazes are you doing here?’

As scarlet as she’d been pale moments before, Sarah turned and ran into the kitchen and slammed the door behind her.

How far did that blush extend?

Scalding heat ignited his libido and his body reacted.

His blood and glance went south.

Heath cursed, scooted down the hall and up the stairs to his bedroom. Abandoning all thought of a hot shower, he stepped under an icy blast, his mind working overtime. What in hell was Sarah Kreagan doing here? Coping with the spoiled princess, daughter of one of New Zealand’s richest men, sure as hell capped off his day.

Perhaps my mother was right….

Sarah leaned against the kitchen bench struggling to breathe. Her pulse raced and she held trembling hands to hot cheeks.

For years she’d fantasized about seeing Heath Mullein naked and boy had she gotten an eyeful. He was one impressive male. All sleek, bronzed, work-honed muscle, and although startled, he’d faced her unabashed.

She closed her eyes, but the image of Heath, in all his unadorned, manly glory had seared itself into her brain. Heat coursed through her from head to toe, a heat that had nothing to do with embarrassment and everything to do with lust.

Talk about starting out on the wrong foot.

Sarah sighed softly. She’d taken a risk turning to Heath for help and she’d worried that he would show her the door.  What she hadn’t planned on was surprising him, in his own home, and catching him buck-naked. What she’d imagined was him greeting her on arrival, and being welcomed.

So much for my fond imaginings.

Desperate for some activity to subdue her nerves, Sarah filled the coffee maker. She knew Heath must be hungry after a long day in such foul weather.

The knot of tension and dread in her belly tightened as she heard his footsteps in the hallway a moment before he walked into the kitchen. His scowl did nothing to ease her nervousness.

His cinnamon brown hair was still wet and slicked down, every wayward curl ruthlessly tamed. He’d changed into well-worn denim and a tight black tee that clung to his muscular body, but Sarah found it far too easy to visualise him wearing nothing at all.

—5 stars
This series has developed into a ‘keeper’ for me. I loved “Safe In A Stranger’s Arms” …which introduced Jenna and Gabe. Now, I’m delighted to read … Heath’s story… the troubled teenager has all grown up and a veterinarian farmer, managing the family property of Rata Ridge…he still carries emotional baggage from his childhood. Sarah, has her own set of serious problems and emerges out of a terrible storm… and asks him to marry her. I so enjoyed this meeting – Susan Rees
…It was like welcoming old friends as…it unfolds against the setting of beautiful Katherine Bay…I want to find that stretch of coast and holiday at the Kreagan’s resort! (If only!) There is drama and mystery and a touch of the paranormal as Cassie Piper offers her uncanny “second sight” abilities…a strong and thoroughly believable love story. Ms Wine creates a strong cast of secondary characters and reaffirms the importance of family in our lives through Heath and Sarah’s story. I’ll definitely make time to re-read this one!