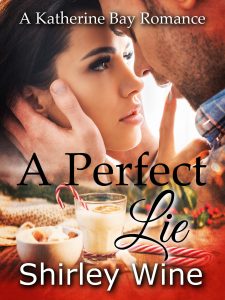 Risk his mission or save an innocent woman’s life?  In a split second Jace Mullein makes a choice that will change his life forever…

To save Ashlyn from falling into the clutches of a vicious international criminal who takes no prisoners Jace is forced to return to the home he left behind and face his bad-boy past, and the family he betrayed.

Frightened for her life, Ashlyn has no choice other than to trust Jace to keep her safe. And quickly,  she learns to love and trust him … then in one horrifying moment she uncovers the brutal truth about his past and his interaction with her family and she’s forced to question everything.

Jace Mullein grew up hard and he grew up mean…. and left Katherine Bay with a chip on his shoulder…

A shaft of light splintered the darkness of the alley behind the museum. Light where there should be none. Jace Mullein almost choked on his last swallow of soda, his fist clenched and the can crumpled. He swore under his breath when he glimpsed the woman momentarily illuminated in the bright beam.
Is that the curator?
Does the freaking woman have a death wish?
Shoving the empty in a pocket, he tensed every sense alert and as she ran toward him a flicker of torchlight captured her panicked expression, her pale face rigid with terror.
Jace reacted.
If Santos caught her she would die, horribly.
As she came abreast, he caught her around the waist and plastered a hand over her mouth and silenced the scream bubbling up her throat against his hand. She bucked and came alive in his arms in a demented frenzy. Arms, legs, elbows, every body part of hers became a weapon. It took all his strength to immobilize her limbs, protect his family jewels and maintain the pressure on her mouth.
“Quiet,” he breathed in her ear. “You want to get us both killed?”
She was so close he could smell her fear, some sort of light floral scent, and a warm, womanly musk. Her struggles eased as she shook her head.
“I’m with Ace Securities. I won’t hurt you, okay? If I move my hand will you be quiet?”
She nodded, but the way she trembled left him far from reassured.
Working with police, his firm was staking out the Katherine Bay Gallery in an attempt to nab a gang of artefact thieves. Intel pointed to an imminent raid on the current exhibition. The one person Jace never expected to catch was the acting curator.
Had she tipped off the raiders?
Muffled thuds, harsh whispers, a hasty footstep, the scrape of metal on stone, a startled yelp far too close.
Shit. She’d broken their cover.
Jace pushed her face into the cove of his neck. Blood thundered in his ears. His heart pounded like a kettle-drum against his ribs. He yanked off his black beanie, dragged it over her head, scooped up the fall of hair shimmering like a beacon in the dark.
The footsteps were now distinct.
“See her?”
The sandpaper rough voice was so close Jace daren’t risk using his two-way radio to alert his team. His grip on the woman tightened. She shuddered.
Would she betray them both?
“Nah, let’s split.”
The second man’s cool, precise tones made Jace even more aware of their danger. This was Santos’s head honcho, a man whose ruthless reputation preceded him.
“You shoulda cut her off.”
“The broad decked ‘arry. She can’t get far. Carl’s at the other end. You go up the lane, I’ll go down here.” Torch light flickered again. “Turn it off you fool.”
“No need to get snotty. Santos will be mad if she gets away.”
Jace’s captive shuddered. She moved closer trying to crawl inside his skin?
“He gets right nasty missin’ his fun you mean?” Still bickering in low voices, the two men moved away.
Jace loosened his hold and opened a door behind him that lead to a courtyard. He pushed her through the opening. He hurled the empty can down the alley. It hit trash cans; the clatter echoed by a shout, and running footsteps headed in that direction.
“Quick.” Jace caught her wrist, hauled her at breakneck speed across the courtyard, through a second door and down another alley. He knew these alleys blindfold. In the past they were among his favourite places to hang out and tonight that knowledge gave him an edge.
“We’ve given them the slip, but we have to move.”
“Let me go,” she panted, trying to wrench her hand free.
“Lady, Santos’s victims don’t die easy. You want to be next?”
If smooth voice caught them—the thought increased Jace’s speed. He cursed the laws that prevented him carrying firearms. He would relish the security of a pistol right about now. She shuddered and stopped fighting him.
At last she caught his urgency.
The sound of running footsteps reached him, far too close.
Jace hauled her behind the dumpster. He’d stashed his motorbike here earlier. Without breaking stride, he boosted her and she jumped astride the bike, he leaped on in front of her.
“Hang on lady; we need to get out of here. Fast.”
He kicked up the stand.
The roar of the powerful engine split the silence.
The headlight beam picked out two men in stark relief.
Jace reacted with well-honed skill. He gunned the engine and aimed the bike directly at their pursuers. They dived, one to each side of the alley, cursing obscenities. Once past them, he weaved the bike from side to side.
Infuriated shouts faded amid the whine of bullets.
His passenger clung to him like a limpet to a rock.

Ashlyn Pritchard clung to the biker with a death grip. The powerful machine throbbed between her legs as it tipped-tilted from side to side. Dizziness and nausea had her fighting down the sting of bile.
Now is not the time to throw up.
Breathing hurt. Wind whipped at her face, every difficult breath filled with a subtle, sexy aftershave, leather, petrol fumes and taut strength. Her overwhelmed senses were imprinted with the hard crush of his arms, the protective shield of his huge body. And now, every sinuous move as he guided the bike through the night was sexily provocative. Overpoweringly male, his strength as he’d subdued her struggles was still far too fresh for her to be anywhere near comfortable.
Who was he?
Santos’s victims don’t die easy.
His blunt words painted a horrible picture.
Was he part of the security team staking out the gallery as he claimed? Ashlyn silently prayed—for once in my life let me be lucky.
Leaping off this death-defying machine was not an option.
Within minutes, she was hopelessly lost.
They careened through an endless maze of alleys, bounced over surfaces so rough she was almost pried loose from the mountain of muscle she was clinging to. The motorbike jolted down steps and crossed private yards. Laundry on clotheslines whipped at exposed flesh and just as nausea threatened to overwhelm her, the biker eased the huge machine onto a smooth surface.
The highway?
Ashlyn gulped in a relieved breath and opened her eyes, only to shut them again. Blurred black ribbon raced past at a dizzying pace. It was better not to look. Eventually, he turned the motorbike onto a narrow gravelled track and once well clear of the highway, he stopped the bike, dropped his feet to the gravel and cut the headlamp.
He turned slightly. “You okay back there?”
“I think so.” Ashlyn was shaking so hard her teeth chattered.
A husky laugh rumbled from him and she felt the vibration beneath her cheek. “Just making sure we’ve not been followed.”
Her heart skipped a beat and she glanced back over a shoulder, her grip on him tightening convulsively as the spooky, crowding blackness sent a thrill of fear up her spine. At this moment this stranger was the lesser of two evils, a buffer between her and the terrifying darkness.
He pulled a torch from a side pocket of the bike and handed it to her. “Shine that ahead for me, darlin’.”
Somehow, she pried a hand loose from his torso and did as he asked.
With excruciating slowness, he guided the bike up the rough track. In the weak light, ghostly shadows leaped from overcrowded verges. After what seemed like an age, he switched on the headlamp, took the torch from her numb fingers and guided the growling beast of a machine up an even steeper incline into the bush clad hills.
Where is he taking me?
Ashlyn’s heart clubbed painfully against her ribs.
Panic threatened to overwhelm her and make her hyperventilate. All sorts of improbable scenarios scrabbled in her brain, some gaining traction, some not. After what seemed like a lifetime, the bike rumbled to a halt.
Her rescuer held it upright as he half-turned toward her. “Can you get off?”
His deep voice startled her into loosening her grip.
“I think so.” Ashlyn put a leg over the bike, but her abused limbs refused to support her. He caught her and held her upright, his arm all corded muscle.
“Hold on.” He swung one powerful leg over the seat, kicked out the stand with a booted foot and stood up as he said with rough gentleness, “Come on, Daisy, let’s get you inside.”
Ashlyn sagged against him as fright, cold and reaction coalesced into enervating weakness. This close, the rumble of his deep voice was a physical resonance. Heat radiated from his powerful body and she wanted nothing more than to curl into that heat and pretend the last half hour had never happened.

Tense and tight, with twists and turns a-plenty and some fairly snarky family on Ashlyn’s side. I’m sure you’ll love to hate a couple of these secondary characters! There is action and danger and sexual tension as Ashlyn tries to work out if Jace is truly her protector, or using her to gain revenge. He is a strongly self contained man but oh, how I wanted to ride behind him on that motor bike for the adrenaline rush of a hot man on a big machine! You’ll definitely want him on your side … Susan Rees