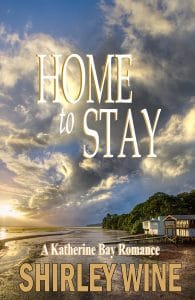 A new book in the hugely popular Katherine Bay series is now available for pre-order on all e-Book sales platforms – available March 31st.

Amazon  Barnes&Noble  Kobo iBookstore  and for pre-sale on Smashwords

Her problems bring them together, but only a miracle can erase their differences—

Wounded in a nasty divorce, Willow Couldray is determined to carve out a new life. Inheriting Moana Point from her grandparents—the only place where she’s ever truly felt at home—offers the new start she craves.

Transforming the Katherine Bay homestead into a bed and breakfast comes with unforeseen problems, like falling for her much younger neighbour, Zach Callahan. It’s almost cradle snatching!

and I knew he would always have his own book – it’s been a long time coming, but he’s finally here – and he is as captivating as a man as he ever was as a toddler

Here he is in Safe In A Stranger’s Arms:

For nerve-wracking moments neither adult moved nor spoke; at last, he shrugged, spread his hands and shook his head.

Relief made her tremble.

“Let’s start over.” He extended his hand. “Gabe Callahan.”

“Jenna Mullein.” She eased out a soft, thankful breath and shook his hand. “And these little rug-rats are Zach and Zoe.”

“Yes.” She pushed a heavy lock of hair back behind one ear.

It was a fair question given her aggressive reception, but still, she hesitated. Was it wise to confide too much in this stranger? “No, I have two brothers.”

“Mum. Zach’s being a dork. He’s calling me names. Make him stop calling me girly, girly.”

Jenna winced, jerked awake from her afternoon nap, Zoë’s screech worse than fingernails on a chalkboard.

The January day was blisteringly hot and Jenna longed for a spell at the beach, but swimming and surfing were out of the question for her this summer. Gabe had insisted they spend the entire summer at Heron Lodge closer to medical assistance, and although reluctant, Jenna had agreed.

The downside was the twins’ constant bickering.

They tolerated each other much better when they could burn off excess energy in the surf. At twelve going on thirty, Zoë rose like a fish to the fly at her brother’s teasing. Something Zach exploited.

“Roll on school,” Jenna muttered as she went to referee this latest spat. She was counting down the days until the end of the summer recess.

As she walked down the hallway she heard Zach warble, “Tell-tale-tit—”

She rapped on his door and opened it. “I heard that young man. Leave off tormenting your sister.”

Zach looked up at her, his dark eyes full of mischief. “Aw mum it’s fun. Zoë bites so well.”

Well, who couldn’t love a kid like this – as a mother of twin sons, I can so relate …

Now,  Zach is a man, and he is perfect eye-candy – and he certainly catches Lark Couldray’s eye.