Easter – The Calm After The Storms 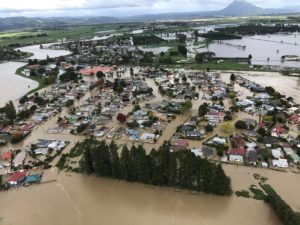 First we had Cyclone Debbie who dumped enormous amounts of rain on us … so much so that the Rangatieki River breached it’s stop banks and flooded the Bay of Plenty town of Edgecumbe.  (see pic left)

The whole town had to be evacuated with residents only being allowed back in to begin cleaning  up the resultant mess yesterday. 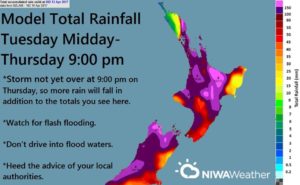 Then on Thursday last, the day before Good Friday … the whole country was braced for the arrival of Cyclone Cook … schools nationwide closed, flights and ferry sailings were cancelled and people were advised to delay Easter travel. Again the Bay of Plenty was n the direct firing line … fortunately for us, Cook made landfall further down the coast.. and also fortunately for Edgecumbe residents… although coastal communities were battered by wind and rain, the heaviest falls were inland …

The Piako and Waihou Rivers in the Waikato/Hauraki basin have burst their banks and flooded acres of farmland and cut road access.  In some parts, the water has cut canals right through the roads, isolating farmers and communities.  (Piako River, right) 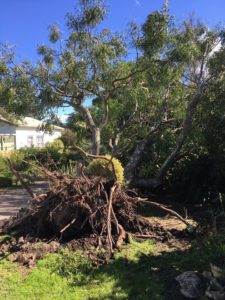 Eastern Bay of Plenty and Hawkes Bay bore the brunt of the wind, with trees up rooted, roofs torn off and power lines brought down … some people are still without power.  So Easter dawned, still, calm sunny and for the most part rain-free. And we really need the sun to dry us out.

Mother nature can be capricious, but recalling Cyclone Celine that struck New Zealand on April 10th  1968 and the destruction it wrought, including sinking the Interisland Ferry The Wahine with the loss of 69 lives, the country escaped very lightly indeed.

In 1968 the winds blew rain through the weatherboards of our house … I’ve never seen the likes of it, before or since. This time apart from a soaked garden … we are truly counting our blessings.