This story is told from the perspective of three women caught up in the adoption triangle … the birthmother, the adoptive mother and the adopted daughter…this is a triangle played out in countless families throughout the world.

When I finished reading this book I knew I simply had to ask Felicity to write this post…. Here is her response:

Why I simply had to write In Her Mothers’ Shoes 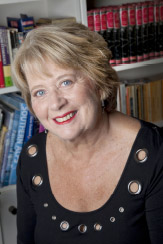 Like many Baby Boomers, I was born to an unmarried mother in the 1950s and adopted at birth.

My birth mother never even got to hold me or say goodbye. I was simply taken from her while her stitches were being sewn up and she never saw me again.

My adoptive parents told me from an early age that I’d been adopted and it never seemed a big deal until I reached my teenage years. This is the turbulent time when many of us question our parents and wish we’d been born to someone more glamorous and lenient. I know that I was certainly keen to know who my “real” mother was…although strangely enough I wasn’t so fussed about my birth father. 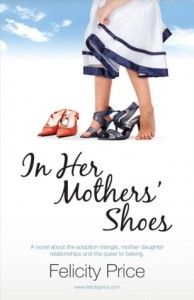 It wasn’t until the New Zealand adoption laws changed in 1986-7 that I was able to do anything about it.

Finally, in the late 1980s, I got to meet her…this strangely familiar woman who had given birth to me… but I had to wait another twenty-two years until I was able to meet with my new brothers and sister.

During this time, the more people I spoke to about finding my new family, the more I realised just how common my story is. It seemed almost everyone had a half brother or sister, or cousin, or some close relative who’d suddenly popped up out of the blue. In Her Mothers’ Shoes was a story waiting to be told, and for some time writing his book had certainly occupied my mind.

Until this time, my books had been similar to Marian Keyes’ – a mix of light-hearted humour with some serious issues – essentially written for entertainment. The title of one of them – A Sandwich Short of a Picnic – says it all.

This new novel (yes, it is fictional, but obviously based on my story) about finding my birth family, had to be different – I needed to allow for the heart-wrenching experience my birth mother lived through – the heart-warming emotion of finally meeting someone who looked like me – and after a lifetime the overwhelming sensation that – at last, I belong – I actually fit in.

To do this, I worked part-time while I attended a year long course with Bill Manhire at Victoria University studying Creative Writing, a wonderful experience. I learned to stop over-writing, over-explaining, and how to internalise better – all things that helped me write a better book.

When it was finished, my usual publisher, Random House, told me In Her Mothers’ Shoes wasn’t sufficiently commercial – which it wasn’t, especially when compared with my earlier books.

So I published it myself – in print and online – and documented this journey on my blog… very much still a journey in progress… because I’m currently writing another book… and it’s quite different.

Will it be commercial enough – who knows – time will tell.

Finally, we have bid goodbye to 2020.  A year of lockdowns, worldwide illness has certainly made it a year to remember, for all the wrong reasons. It has been a time to reassess what is important in life – and I for one, have been down-on-my-knees grateful to the artists of all persuasions who live […]