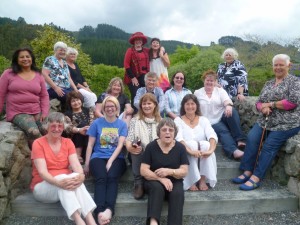 One of the real advantages of attending a writer’s retreat is having the chance to explore new ideas.

In this case it was not a “new”  idea…more a case of visiting an ancient idea, The Viking Runes as used by The Ancient Oracle.

In a workshop given by author Jen Yates and Gaylene Atkins, they showed us how we can use Runes in a thoroughly modern way.

I have to confess I would never have thought to use Rune Stones to develop characters for a romance novel, but after taking part in this workshop I am excited at the possibilities.

Jen gave us a great demonstration …

She worked with the stones to develop the characteristics and motivations of her two main characters for the historical novel she is plotting.  After spreading the stones face down on the table, she closed her eyes and moved her hand about two inches above the stones and as she felt the kinetic energy, discarded some until there was only a few and out of these selected the one giving off the most energy.

It was fascinating to watch.

There had been a free for all discussion among a lot of us who had read the first book in the series she is writing so we already knew a little about the two main characters who were bit players in the first book.  The heroine thought she was plain, and as the plain sister would never marry, but the hero could only see her kind heart…

As Jen picked up the rune she’d zeroed in on for her heroine and then read out to us what this Rune stone signified, the ideas flowed thick and fast on how to build character and motivation. It was an exhilarating experience to be part of the interaction between Jen and her audience.

Will I use try this technique for myself?

Definitely! After trying several shops I finally managed to get a copy of The Book of Runes by Ralph Blum and a set of Rune Stones in Huntly.  Will I get as good as Jen Yates at using them? That remains to be seen.

With this workshop and the one run by Sophia James, for the exercises I worked on Logan Sinclair’s story … the sequel to Lovers’ Lies that so many of my readers have asked for… and thanks to these inspiring people who are prepared to share the technicalities of their craft, I have the whole story almost mapped out.

Jen Yates is the author of  Through All Eternity  http://amzn.com/B009MFQUBC  a stunning time travel novel set between ancient Atlantis and the modern world.