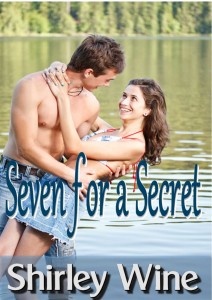 Seven for A Secret by Shirley Wine

For sale for a limited time only …. 99cents

Why has she never known her life was one colossal Lie?

When a posthumous letter from her father destroys Anna Belmonte’s sense of Identity . . . she goes in search of her birth mother . . . and the truth.

Pitchforked into mediating an emotional minefield, Slade struggles with his attraction to this cuckoo in the nest…

After years resisting her father’s attempts to coerce her into an
arranged marriage, Anna is leery of men and considers marriage and a career in art incompatible.

The instantaneous attraction between her and Slade makes her question this decision…. perhaps it’s possible to have it all. Marriage, children and a career as an Artist.